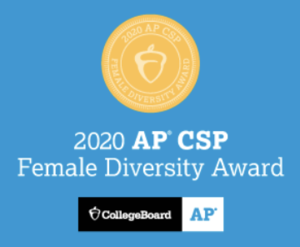 KHS is one of 56 schools to achieve this national honor. Schools honored with the AP Computer Science Female Diversity Award have expanded girls’ access in AP Computer Science courses. During the 2019-20 school year, King High School had 27 total enrolled in this course and 17 were female.

“Today’s students need the power to shape technology, not just cope with it,” says Stefanie Sanford, College Board chief of global policy and external relations. “Young women deserve an equal opportunity to become the next generation of entrepreneurs, engineers and tech leaders. Closing the gap in computer science education empowers young women to build the future they want.”

The first year of AP Computer Science Principles in 2016-17 attracted more students than any other AP course debut, and participation is on the rise. In 2020, more than 116,000 students took the AP CSP Exam—more than double the number of exam takers in the course’s first year, and a 21% increase over the previous year. In 2020, 39,570 women took the AP CSP exam, nearly three times the number who tested in 2017. The number of female AP CSA exam-takers has increased by nearly 25%.

Providing female students with access to computer science courses is necessary to ensuring gender parity in the industry’s high-paying jobs and to drive innovation, creativity, and representation. The median annual wage for computer and information technology occupations was $88,240 in May 2019. However, a code.org analysis of 2017 Bureau of Labor Statistics data finds women represent just 24% of the 5 million people in computing occupations.

That’s why new College Board research about AP CSP is so encouraging. According to the data, female students who take AP CSP in high school are more than 5 times as likely to major in computer science in college, compared to similar female students who did not take CSP. The study also finds AP CSP students are nearly twice as likely to enroll in AP CSA, and that for most students, AP CSP serves as a stepping-stone to other advanced AP STEM coursework.

Sheldon ISD is one of the fastest growing school districts in the greater Houston area. With more than 10,28 students, the district increases in student enrollment at roughly 2-3% annually. Sheldon ISD has 12 campuses: two early learning centers, six elementary schools, two middle schools, one comprehensive high school, and one accelerated high school program. Its mission is to provide students with personalized learning opportunities to graduate them ready for college and a career. King High School offers six career academies to equip students with resources and skill sets for their chosen path after high school.